The Effect of Laser Tag on Board Performance

There I was, standing face to face with a large, bemused group of boys about eight years old. I had just emerged from an idling bus along with seven other members of our board of directors. These kids were staring at us like we were aliens emerging from a space craft. Why the stares? Because our board of directors – composed of nurses in their 30s 40s 50s and 60s - had just converged at a laser tag facility and this horde of eight year olds was no doubt not accustomed to being booted out by a group of people the age of their parents or grandparents.

Our association – the Association of Pediatric Hematology/Oncology Nurses – always has a team-building event the evening before the board of directors meeting. Typically this event involves something like cooking, painting, wine tasting, a boat cruise, or volunteering at a charity. This time was different, however, as Mel, our president, was adamant that she wanted to do laser tag for our team building event. Mel was a terrific president who I trusted immensely, but I have to admit having to pause and think about this one. OK. I can do this. I knew I would stink at it, but I knew at least Mel and I would have fun. What about the rest of the board? Would they enjoy it, or, like many of us introverts, would they dread the thought of yet another forced social activity and participate reluctantly and/or half-heartedly?

We talk a lot as a staff about how our APHON members are heroes; how they regularly not only heal their patients and families but also preserve and maintain dignity, quality of life, and hope. Well, apparently many of them could also moonlight as deadly assassins, as the laser tag was a big success. The extroverts in the group loved the noise, the activity, the teamwork, and the energy. The introverts fully and enthusiastically participated, often silently stalking those of us who were not careful enough to peek around that corner or staircase. All of us had a great time, and made many memories that we will share and laugh about for years to come. 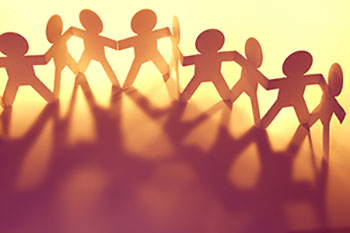 Board activities such as dinners, boat tours, sporting events, and, yes, even laser tag, are occasionally viewed as non-essential luxuries, evidence of excess spending and irrelevant fluff. Nothing could be further from the truth. These activities are crucial in creating and reinforcing strong interpersonal relationships among board members. Many researchers have discussed the extent to which these strong interpersonal relationships lead to more functional boards and more effective associations. For example, Chait, Holland, and Taylor (1991) wrote that when board members reflected on effective meetings, they often commented on how effectively the board coalesced to form a dynamic and cohesive group. Brown (2015) surveyed executives and board members from about 300 different nonprofits, and found a strong positive correlation between the interpersonal aspect of board performance and organizations that operated at a net financial surplus. He also found that a positive interpersonal dynamic among board members was responsible for higher perceptions of board performance. He wrote that “…this study suggests that time spent building an effective board as a team is not wasted.

So, it turns out Mel was right about laser tag, just as our other presidents have been right about painting, boat cruises and packing hygiene kits for local charities. Next time I won’t hesitate when a new president suggests something unique for our team-building exercise, and I won’t balk at the small expense associated with it. But, I will be afraid – very afraid - if any of them challenge me in the laser tag arena again….

Brown, W. Exploring the Association between Board and Organizational Performance in Nonprofit Organizations. NONPROFIT MANAGEMENT & LEADERSHIP, vol. 15, no. 3, Spring 2005.