The quote that best defines the current state of the healthcare debate came in a meeting with the nation’s governors at which President Trump exclaimed, “Nobody knew healthcare could be so complicated."  Earlier this month, the president delivered his remarks to a joint session of Congress where many were anxiously awaiting directives on how to repeal and replace the Affordable Care Act (ACA).

Across the country, town hall meetings have become contentious and members of Congress are in desperate need of concrete solutions to promises made on the campaign trail about the ACA. The rhetoric of the President’s speech was well-received, but fell short on providing the details many were hoping for.

Healthcare associations understand the complexities of the system and are best positioned to help Congress and the Administration craft policy solutions that ensure the best possible outcomes for patients, families, and caregivers.  President Trump identified five principles to guide Congress in the ACA repeal and replace process: 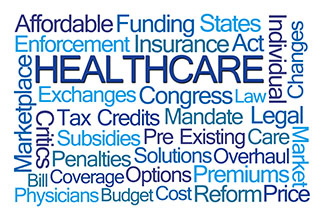 At Association Management Center, healthcare associations are positioning themselves to be leaders in the discussion and demonstrating their knowledge and expertise through recommendations to Congress and the Administration. House Republicans released the American Health Care Act early this week, which mirrors many of the provisions that have been discussed previously, including repeal of the individual mandate, replacing tax subsidies with refundable tax credits, and restructuring Medicaid through the use of block grants to states. Key items such as maintaining coverage for people with pre-existing conditions and allowing children to stay on their parents' plans until the age of 26 remain, although new continuous coverage provisions could play into how these protections are operationalized.

There continues to be dissention from policymakers who view this legislation as “Obamacare Lite” and it comes at a critical point as the House wants to move this bill quickly. The Congressional Budget Office still needs to score the proposal to determine how much it will cost and what the impact will be on current covered enrollees. House leadership has stated that repeal and replace legislation will be voted on by the end of March, but for that to happen it might take a little luck of the Irish.

Whether a vote happens in March or not, the complexities of the healthcare system will remain the same and policymakers will continue to strive for improvements. Healthcare associations must stay nimble and engaged in the conversation. The value that we provide is our knowledge and understanding of the key drivers that influence healthcare delivery; knowledge and understanding that is bipartisan and patient centered.