As of this year, experts report as much as 74% of online traffic consists of video content. In our daily lives, we see countless videos on Facebook, in emails, and even on websites. According to a study done by Insivia, viewers retain 95% of a message when they watch it in a video compared to only 10% when reading it in text. In the association industry specifically, video communication is still considered a growing trend helping more organizations connect with members and prospective members like never before.

Beginning in fall 2016, the American Academy of Hospice and Palliative Medicine (AAHPM), released a promotional video for our Annual Assembly. This video received over 1,500 views, becoming the most watched video in our small video library. Since the video performed so well, we took this concept one step further in 2017. 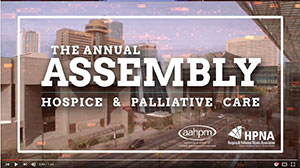 The idea. AAHPM’s plan involved creation of a daily wrap-up video for attendees to relive the events that happened the previous day while onsite at the assembly. We hired a video crew (the same one that created our promotional video) to take footage of the daily activities, shoot interviews for the following year’s Assembly promotions, and edit the video footage onsite each day. Our long term relationship with the production company allowed us to hit the ground running, instead of spending a lot of time in the discovery phase.

The share. Where we shared the video was key—we wanted to ensure maximum exposure to our members, attendees, and prospects. We posted the video on our YouTube channel each morning and shared it on social media each afternoon as a way to continue to spread excitement. The video was shown at the opening of our plenary sessions. Each day, the lights were lowered, a countdown clock caught the audience’s attention, and the video was played.

The result. Each wrap up video was very well received and the attendees continue to share the videos even after the conference concluded. It’s a great way for them to share with their team back home what they experienced and how beneficial it was without having to describe it. AAHPM’s video recap series provided a daily reminder of the “why” behind our attendees’ chosen fields—the care of patients with life-threatening or serious conditions—and the common values and good work that bond them together. After conference, they head back to their daily lives feeling revived and invigorated to do even more for the field and their patients.

You know the saying “a picture is worth 1,000 words”? Invisia reports that one minute of video is actually worth 1.8 million words. Our videos tell a great story. It’s difficult to convey and celebrate the true excitement of a conference, but we feel we achieved just that through our daily videos.