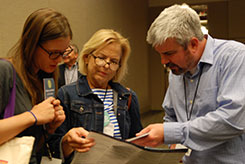 As leader of the organization and chair of the board of directors, an association’s president has a unique responsibility to guide the actions of numerous volunteers to ensure they make decisions based on the association’s best interests. Most often, this person is well-prepared to act as an advocate for members following many successful years of service. Most often, this person also has extensive experience acting as a leader within his or her field, experience that proves invaluable to their role as president.

What they most often do not have, however, is much experience working in an association environment and with member constituents—a role that brings with it a host of unique issues, challenges, and responsibilities.

So how do you prepare an incoming president for the rigors of the job? Staff at the American Academy of Hospice and Palliative Medicine (AAHPM) suggest the following three tips.

According to Steve Smith, AAHPM CEO and Executive Director, although they always are eager to begin, most incoming officers have questions and even some trepidation about the expectations, responsibilities, and the time commitment associated with being president. By engaging with them early, staff can help resolve questions and identify opportunities to work on meaningful projects and initiatives that will continue during the individual’s term as president.

But the teaching doesn’t stop at one call or a single session. The president-elect is exposed to a wide variety of education—from many different stakeholders—to ensure they understand every aspect of association and board operations, their relationship to their fellow members, and the unique business of running a nonprofit. For AAHPM, this includes participating in several planning calls with staff, stepping in to perform tasks as requested by the current president, reviewing various collateral from the association and facilitating new board orientation with incoming leaders.

Smith adds, “By exposing incoming leaders to key aspects and expectations of the presidency prior to the start of their term, we can help ensure the president-elect hits the ground running and feels prepared to assume the office.”

Although AAHPM has developed written materials to assist board members navigate the bylaws, policies, governance structure and decision-making processes—the AAHPM Board of Directors Handbook—that alone is not enough to just rely on when preparing incoming leaders. To ensure volunteers get the best association education possible, we also borrow from the expertise of other industry experts and thought-leaders.

Every year, the president-elect and staff from AAHPM attend a workshop on governance and management of associations at the American Society of Association Executives (ASAE). This offsite education session helps staff develop stronger relationships with incoming leaders, supporting a more seamless transition and more productive term. But, perhaps even more importantly, it exposes the president-elect to the best practices and leading research in our industry—

“Participating in the ASAE Exceptional Boards Course proved to be an excellent entrée for my year as President, said Janet Bull, MD MBA HMDC FAAHPM. “The dedicated time together with AAHPM CEO Steve Smith and Director of Governance Peggy Reilly helped establish a strong dialogue and working relationship. I gained new insights about high-performing boards and valuable information that helped me feel ready to lead and assume the responsibilities of president.”

But by expanding the scope of the president-elect’s education—and finding time to consistently reconnect with and mentor them—you’re not just teaching these important volunteers to lead their professional association, you’re also helping them to leverage their relationships with members, peers, and customers. Understanding both how to govern and the business the association will help a president-elect not only during their term as president, but throughout their future as a leader in the industry.