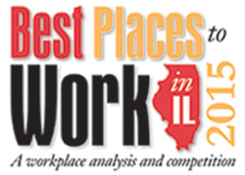 For the fourth time since 2010, AMC has been named one of the Best Places to Work in Illinois.

As it was in 2010, 2011, and 2014, AMC has been included in the 2015 list of medium-sized companies (101–499 U.S. employees) named in the statewide awards program, which honors the state’s best employers benefiting Illinois’ economy, workforce, and businesses.

“It’s an honor to earn this recognition,” said AMC Principal Jeff Engle. “We are fortunate to have an incredibly talented and passionate team of employees who effectively serve our association partners. And, just as we have been since our founding in 1974, we are committed to providing an excellent culture so our employees continue to find value in having a career at AMC.”

AMC will be recognized at the Best Places to Work in Illinois awards ceremony on Wednesday, May 6, and will be profiled in a special publication by The Daily Herald Business Ledger on June 22.