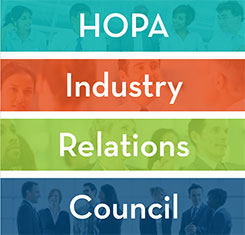 Redefining Industry Relationships: How HOPA took its IRC to the Next Level

When the Hematology/Oncology Pharmacy Association (HOPA) first launched their Industry Relations Council (IRC) in 2011, only four companies saw the potential of joining as supporters. But under the direction of Association Management Center and Julie Ichiba, director, professional relations, for HOPA, the IRC quickly became profitable, productive, and very popular.

In the span of only a few years, the IRC saw an astounding 525% increase in membership—now counting among its 26 participants companies like Astra Zeneca, Bristol Myers Squibb, Genentech, Takeda Pharmaceuticals, and Walgreens—and a 410% increase in revenue. And the members, and revenue, just keep coming, with some three to five new companies joining every year.

But how did Ichiba and the HOPA staff make such a drastic change in such a short time? According to Ichiba, it was all about changing the value proposition for potential IRC members.

Making the Most of Membership

To really tap into that key audience and understand their needs, Ichiba first leveraged the HOPA leadership by forming a committee focused on developing an appealing, and mutually beneficial, program. Committee members included the association’s board president—whom Ichiba refers to as the “mayor of HOPA” because of her close working relationships with key players in the industry—and president-elect, several board members, and a former industry member-turned-consultant.

“The committee asked, ‘What can we offer them?’” Ichiba said. “[We realized that] what’s important to them is the networking, the collaboration, and the access.”

Although many companies have some access to HOPA’s membership through the association’s annual meeting, Ichiba and the committee realized that providing more targeted opportunities for discussion and collaboration could transform the relationship between the industry and individuals into a true partnership.

Building Up the Benefits

From there, the committee developed three tiers of membership in the IRC, each of which offers industry partners unique benefits they cannot get anywhere else.

Premier membership, the top tier available, for example, provides companies with one-on-one meetings with the HOPA leadership; the opportunity to hold an advisory board, where companies have direct contact with an audience the association helps curate for maximum results; an invitation to an IRC-specific Summit, which “always [has] a positive outcome,” said Ichiba; and near-constant access to HOPA leadership and to Ichiba’s own extensive list of contacts.

Through these targeted meetings, industry can ask questions directly to these oncology pharmacists—their potential consumers—and make necessary changes to their products that benefit both the end-user and the company’s bottom line.

“[The benefits of the IRC] are a combination of all of the things we offer, plus putting them into contact with stakeholders in their audience,” Ichiba said. “That’s why they’re willing to work with us: they get information from members, which could help them save millions.”

It’s not just the members of the IRC that benefit, however; according to Ichiba, the association and its membership also reap rewards from the participation of industry.

“The IRC gives [HOPA members] a direct line to these companies when they might not have had that opportunity before, and actually helps improve products and processes.” Ichiba said. “That’s the goal of the IRC.”

Consistently sharing HOPA’s progress—and its many efforts to help the industry, its members, and the patients they care for—also has opened up greater opportunities for financial support, said Ichiba. “The information we provide to (the IRC) shows them all the activities we’re doing, and often leads to educational grants or additional conference support and increases the opportunities for collaboration partnerships.”

Investing in an IRC

So what should an association that’s looking to amp up the impact of their IRC do? According to Ichiba, one of the keys is listening to the industry.

“(Ask yourself), what’s important to the industry? What’s the bottom line? It’s all about the return on investment for both parties; it has to be a win-win for everybody. So listen!” she said.

Ichiba also suggests associations ensure they get full support not just from leadership, but also from staff, to ensure the program is a success. “Be prepared for the amount of work (that’ll come) and have resources,” she said. “From the executive director down to the administrators, everyone has to be connected. The program is never going to work if marketing or operations isn’t with (you).”

Be the first to know about the latest news and events from AMC. Sign up for our emails!