How Do You Measure Success? Make Digital Marketing Work, Part 2

By Zeina Yacoub and Jerrod Liveoak

In last week’s post, we focused on the marketing efforts used to help the American Society for Bioethics and Humanities (ASBH) launch the Healthcare Ethics Consultant-Certified program in under 12 months. Now, see the results of the marketing strategy, research, and implementation and how success can be measured through statistics, conversion rates, and raising awareness.

Results from the marketing campaign demonstrated great success meeting our KPIs of awareness and conversion for each of the channels we targeted. Although we were not able to directly track applications from our marketing efforts, by creating a goal that tracks application downloads in Google Analytics, we were able to correlate channels with conversion rates.

Over the course of the campaign, 984 users downloaded the application:

As the destination for all other marketing efforts related to the certification program and where our audience ultimately completes the application and submits payment, getting the website right was critically important. Between March and October 2018, the certification section of the website ranked third after content related to ASBH’s upcoming annual meeting and the homepage, with more than 16% of total site traffic.

In addition, we wanted to ensure we could continue communicating directly with as many visitors as possible during future campaigns. Our lead generation form generated 769 new subscribers during the initial launch campaign, with nearly 50% new to ASBH.

All tactics demonstrated some success in attracting visitors to the certification section of the website, and careful analysis of our marketing analytics via campaign tagging has enabled us to continue making refinements to our original tactics to increase effectiveness of our efforts. 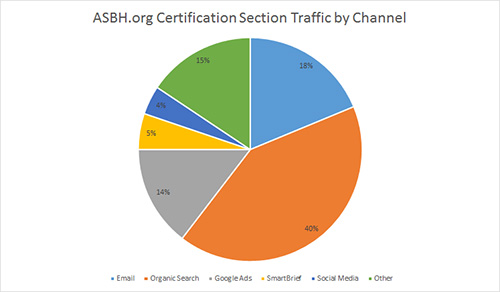 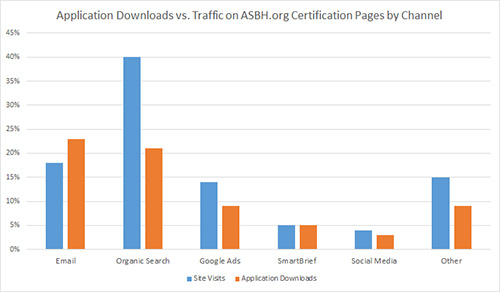 E-mail was our primary method for marketing the new certification program to ASBH’s most engaged audience—their members and nonmembers who had previously engaged with the Society through annual meeting attendance or product purchases. Campaign e-mails attracted more 3,000 visitors to the website during more than 5,000 sessions.

E-mail performance was also a primary way for us to assess the effectiveness of our messaging. Over the course of the campaign, certification-related emails had an average open rate of 39.3% (Informz benchmark for the industry, 36.96%) and average click rate of 17.9% (benchmark, 14.03%). Targeted e-mails performed better than the campaign generally, with open rates more than 41% and click rates more than 35% when targeted by persona. E-mails targeted to subscribers via the lead gen form outperformed those targeted specifically to ASBH’s existing audience; open and click rates for subscribers via the lead gen form were 46.94% and 42.4%, respectively, whereas engagement from ASBH’s existing audience were 34.38% and 20.83%, respectively.

Paid search advertising was a new tactic for ASBH, and results from the launch campaign demonstrated this channel as a cost-effective and successful tactic to raise awareness of the certification program and generate new leads. The Google AdWords campaign ran during the 3 months leading up to the application deadline, during which our ads generated 2,950 clicks to the certification pages of the website, a click-through rate of 1.84%.

The audience research we conducted early in the strategy and planning phases of the campaign proved extremely effective in identifying the additional audiences we targeted through external digital advertisements. A limited number of digital ad placements in AAHPM and HPNA’s NewsBriefs generated more than 1,300 visits to the website and notable increases in subscriptions via the lead generation form.

In addition to attracting our inaugural class of more than 200 certified healthcare ethics consultants, a primary goal of the campaign was to raise awareness of the certification program and differentiate it from other opportunities for this audience. Through the course of the launch campaign, our tactics attracted nearly 5,500 new users to ASBH’s website and more than 400 subscribers not previously affiliated with ASBH who we can continue to speak to about the value of certification for healthcare ethics consultants. This new group will be immensely valuable for future targeted outreach geared to warm leads who have expressed direct interest in the certification program. Overall, we measured success not just in the amount of conversions acquired (albeit that it is crucial), but also in the awareness raised about a program that is still as new as it is.