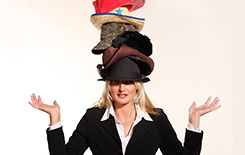 Fiduciary Duties Are Not Hats

If only it were so easy. Fiduciary duties are not hats that can be removed or placed back on your head depending on where you are. When you agree to serve on a not-for-profit board of directors, these fiduciary duties stick with you, whether it is convenient, and regardless of what setting you are in. If one insists that fiduciary duties are analogous to hats, I would suggest that they are hats that are stapled to your head, to be removed only when your term on the board has concluded.

As an example, let’s consider the case in which a person, we’ll call her Jane, simultaneously sits on the boards of directors of a chapter of an association and the “parent” association. It would be incorrect to assume that when Jane attends the board of directors meeting of the “parent association,”, the duty of loyalty of the parent association somehow supersedes or takes priority over the duty of loyalty of the chapter. Both are there and are fully in effect. This is often termed a duality of loyalty. Duality of loyalty is just one kind of conflict of interest but has the potential to put affected directors in a terrible position.

Perhaps the best way to avoid a duality of loyalty issue is to have a strong nominating committee and vetting process. Smart, capable, hard-working people will be in demand to serve on boards. Excluding people from the board on the basis of a potential conflict of interest, or duality of interest, is not a reflection of a lack of trust in these candidates. Rather, it should be done out of respect for these candidates to avoid putting them in a no-win position of violating one fiduciary for the sake of another.

Wearing hats for your association is fine and good, but remember that it’s frankly not a good look to wear two hats at once.

Dave Bergeson serves as vice president of client relations on AMC’s Leadership Team and executive director of the Association of Pediatric Hematology/Oncology Nurses.