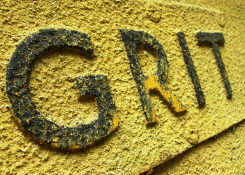 Do you have Grit?!

I attended the 2015 ASAE Annual Meeting in Detroit and there was one topic that really grabbed me, probably because I heard it over and over again; that topic was “Grit!”

I have known about “Grit” forever, but it is one of those old school terms that you just don’t hear any more and I wondered why it came back to life? Was it the 2010 remake of John Wayne’s famous movie True Grit? Was it a new trending term I didn’t know about? Turns out, it actually is back in the spotlight due to a Ted Talk, presented in 2013 by Angela Duckworth.

Duckworth shares her realization that IQ is not the only thing separating successful students from those struggling - grit is what makes the difference! However Ms. Duckworth also stated no one really knows how you develop grit.

After the conference and viewing the Ted Talk, I shared my observations with a group of AMC staff. The very next morning, one of those colleagues, phoned that she just received her daughter’s grade school newsletter and “could I guess the very first topic”? It was “Grit!” The day after the call, I saw a billboard on the Kennedy Expressway while on my way to a meeting, with GRIT in huge letters. Grit was everywhere and that made me think.

What is Grit? Merriam-Webster defines grit in the context of behavior; it is “firmness of Character; indomitable spirit.” Duckworth based her studies and tweaked her definition to be “perseverance and passion for long-term goals.”

I wondered – how gritty am I? I found this quick GRIT assessment and then shared it with AMC staff. Some of our rising stars asked, “now that I took the assessment what next? How can I improve my Grit Score?” It comes down to understanding the traits that comprise grit and how you develop them.

Here are 5 personality characteristics outlined by Margaret Perlis of Forbes that will help further identify, develop and measure your grittiness:

Your ability to manage fear of failure is key and a predictor of success. The truly gritty are not afraid to crash, but welcome it as a part of the learning process and understand that there are valuable lessons in defeat and that perseverance is essential for high achievement. If we know that the grittiest are not afraid to fail, then perhaps one way to develop grit is to follow the advice of Eleanor Roosevelt that said “do something that scares you everyday.”

Courage is like a muscle that needs to be exercised daily; if you do, it will grow and if not, it will atrophy. Courage fuels grit!

There are 638 Primary Personality Traits but the BIG 5 are: Openness, Conscientiousness, Extroversion, Agreeableness, and Neurotic. Of these, according to Duckworth, conscientiousness is most closely associated with grit; thorough, careful and vigilant. Conscientious people are efficient and organized. They tend to show self-discipline, act dutifully, and aim for achievement.

To be gritty, long-term goals are essential coupled with lots and lots of purposeful practice to achieve those goals. Duckworth writes: “…achievement is the product of talent and effort, the latter is a function of the intensity, direction, and duration of one’s exertions towards a long-term goal.” But bottom line these long-term goals help to cultivate drive, sustainability, passion, courage, stamina…grit!

Today, write down your long-term goals and revisit them often to ensure you are on task and on target!

Optimism, Confidence and Creativity: Taylor Swift knows to “Shake it off, Shake it off” to develop grit! But what gives one the strength to just “shake if off?” Futurist and author Andrew Zolli believes that resilience is a dynamic combination of optimism, creativity, and confidence. Gritty people believe “everything will be alright in the end and if not alright, it is not yet the end.”

If you make a mistake or fail, shake it off; learn from your mistakes and come back swinging!

It seems that gritty people strive for excellence not perfection. Excellence is an attitude not the endgame. It is the attitude of an ongoing quest for improvement to be the best you can be but allowing for disappointment to prioritize progress over perfection.

Review your work honestly and ask “how could I have done better?” Implement those ideas to develop excellence and cultivate grit!

”Grit” is an attitude, a belief that you can conquer anything if you stick with it. It is a belief in yourself, a determination to win, a plan for success. It’s sticking to a job until “it sticks to you.” It’s not giving up, nor giving in. It’s putting your best into a project and into your life!”

Marilyn Jansen, Director, Marketing and Business Development, can be reached at This email address is being protected from spambots. You need JavaScript enabled to view it. or by calling 847-375-4811. We’d love your thoughts on the post. Please let us know what you think by commenting on our Facebook page.

Photo Credit: “GRIT” by crystiancruz is licensed under CC BY-NC-ND 2.0