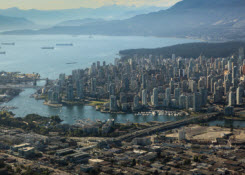 From January 10-13, five of AMC’s meeting professionals descended upon Vancouver for Convening Leaders, the large annual event put on by the Professional Convention Management Association (PCMA). When they returned, we asked them to tell us about their top takeaways.

In reading them, you might notice a theme in their responses – the continued importance of networking, whether within the meetings industry or in the events they’re planning.

My big takeaways from PCMA were most importantly - networking. Often the most important connections and conversations take place during networking events and in the hallways between sessions at this event and the ones we plan for our associations. The opportunity to have so many in the industry in one location at one time is a wealth of conversations just waiting to happen. Another quote from one of my favorite speakers during the meeting, Mel Robbins, was “Go the extra INCH”. Often, the thought of going the extra mile is overwhelming, but if you extend your arm out and then stretch it just one inch more, the thought of going just that extra inch is easily achievable and over time all of the inches add up to a mile.

Taking a look back at my first Convening Leaders event, I would have to say my biggest takeaway was networking. I met many meeting professionals who share not only my same challenges but also fresh ways to handle different situations. It is always refreshing to hear about new ideas that I can implement within the annual meetings that I help plan. The second main takeaway was from a session titled The Happy Hour Effect which asked the question why should we limit ‘happy’ to just 1 hour? The takeaway was to try to bring motivation to whatever we are trying to accomplish and become a better leader. The speaker also touched upon work-life balance and how everyone is always concerned about separating their work and personal lives. However, she mentioned that everything blends together no matter how hard you try to “separate” and the key is to accept the blending of the two.

As this was my first PCMA conference, my biggest takeaway was how important building and maintaining relationships are within the meetings industry. During the conference, I was able to connect face-to-face with those that I worked with but never met in person. By having the opportunity to network with those individuals, I was able to discuss what my association clients’ needs are as well as obstacles that have been faced in the past. This opened the door for more conversations on what type of locations/space would best fit their future needs.

My biggest takeaway was alternative learning environments. At PCMA, they really moved away from doing the standard theater and/or classroom sets. Most session rooms had mixed set ups – long tables, cocktail rounds, high boys, couches, etc. They also had learning labs located throughout the foyer areas of the convention centers. These were as simple as 10 to 20 chairs in a semi-circle around a plasma screen on a stand. The learning labs were used for short 15 to 20 minute presentations on an array of topics from fitness while traveling, apps, LinkedIn, etc.

Every attendee survey I have seen lists networking in the top three most popular reasons for meeting attendance. Creating small conversation areas in the public space and adding more open time in the schedule of events facilitates the networking that so many attendees crave. Our members come to our events hoping to solve problems—solutions are often found during one-on-one discussions between sessions or during networking events. Building spaces to encourage this interaction adds value to the attendee experience and creates fans of our events.

Did you attend? What were your big takeaways? Let us know by commenting on our Linkedin Company page. We'd love to hear what you took away from the event.