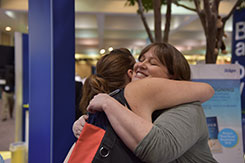 Event Planning: Why You Should Say Yes to that Last-Minute Addition

Picture this: There are 3 weeks until you leave for your annual meeting. Your schedule is finalized, the keynotes and speakers are accounted for, your marketing campaigns are starting to wrap up, and your staff is now shifting into the “hosting” phase of conference. But then you receive a phone call from a game-changing potential speaker.

You and your staff tried for weeks to find a way to incorporate this person into your meeting, but to no avail and ultimately ended up moving on. She then tells you that she is able to speak at the event after all! Everyone is ecstatic…until you remember the meeting is right around the corner. What do you do? If you’re like most associations, your first reaction would be “It’s too late!”

The National Association of Neonatal Nurses (NANN) faced a similar scenario last fall, and with some quick thinking and teamwork, the staff took on the formidable challenge of adding a keynote just 18 days before conference, and succeeded with flying colors.

Kelley French, a Pulitzer-nominated and critically-acclaimed author burst onto the neonatal scene in 2016 with her book Juniper: The Girl Who Was Born Too Soon. The story documents French’s preemie daughter Juniper, and her fight for her life in the NICU. The novel gained instant popularity and after NANN’s now president attended a presentation led by French in the summer of 2016, the association knew they wanted her to be part of NANN’s Annual Conference.

For NANN, the desire to have French speak at the conference in the fall was clear, but with the short timeline, there was much to consider. NANN had not budgeted for an additional speaker, the right sponsor would need to be secured for funding, the schedule had been set for months, travel and meeting logistics needed to be considered, and collateral was minutes from hitting the printer. In the past, the thought of adding French may have turned into a pipe dream. But when the call came through confirming sponsorship, the entire staff dug in and made it happen within hours. Here’s how it came together:

Normally, departments spend months working out details for major speakers. Once funding was secured, NANN cleared typical planning hurdles by the end of one business day.

The result was a resounding success. The team added Kelley French as a “late-breaking sunrise session”, starting at 7 a.m. and 400 of the 850 attendees opted to attend. The presentation itself struck an emotional chord with everyone, and following the presentation, French participated in a book signing in the exhibit hall. Hundreds of neonatal nurses waited in a line that extended out the door for a chance to meet with French. Without question, this session was a highlight of NANN’s 2016 conference.

It’s easy to say “no” when opportunities like this surface at the last minute. Why disrupt your plan and add an offering with only days to spare? But when your entire team comes together, great things happen and it showed with NANN’s 2016 Sunrise Session.

The next time you’re planning an event for your association and an opportunity worth pursuing comes out of nowhere with little time to spare, take a good look at your team. They’re the ones who will make any opportunity possible, and prove there’s no such thing as too late.