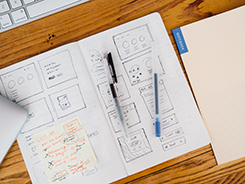 How did I get here? ‘The harder I work, the luckier I get’

How did I get here? It’s been a beautiful combination of hard work and sheer luck, to be honest.

As a senior content marketing and editorial manager in the Creative Media Services (CMS) department at AMC, I work with our association partners on a wide variety of projects, including managing the  production of traditional print products, such as postcards and meeting brochures; writing feature articles and crafting marketing messaging; and assisting my colleagues with client-specific knowledge as they work on search engine optimization (SEO), analtyics, and others services that aren’t quite in my wheelhouse.

Because of the way members in our department help one another with work, I’ve been involved in projects for virtually every client that CMS has served in my 8 years here. I also have enjoyed working with external clients (associations that know AMC’s great reputation) that hire CMS to work on consulting projects, like white papers, web copy, and brochures.

Though I enjoy the work I do and love AMC, a career in the association world was never Plan A—or even Plan B. Until about 8 years ago, I hadn’t even known about the world of association management.

In college, I spotted an ad in the newspaper (the real, dead-tree edition) seeking teens to write occasional movie reviews for publication. The writing samples I sent caught the attention of the right people, and I lucked into a real job: a part-time editorial assistant at a newspaper in the second-largest city in the state.

There, I fell in love with the newsroom and journalism. When I graduated with a major in English, I wanted a career as a newspaper editor. I got lucky when a position opened up on the copy desk of one of our sister papers. It became available due to the promotion of another editor—the same woman who had spotted my writing samples and helped me get hired previously!

On the copy desk, I added to my skillset as I worked on the weekly newspapers, “special sections,” and an entertainment section that went in over a dozen papers we produced. In addition to copy editing and proofing, I accrued a ton of experience in writing headlines (it’s an art) and story planning. At the risk of telling you how long ago this was, I used QuarkXPress at this job, the premier design software before Adobe created InDesign.

A deal within my newspaper group led to the shifting of some publications and employees. As a result, after about 3 years at my second newspaper, I was sent to work on the night-shift news desk in the third largest city in Illinois. My copy chief said he’d been looking to reward my hard work, and I was lucky enough that this surprise deal provided him a way to do so.

That third newspaper would be my last. I spent 7 years of night shifts relishing the ratcheting tension that hit a fever pitch just moments before deadline as we scrambled to get every page perfect and to fit in as much last-minute news as possible by our press deadline. I became the night news editor, managing the team that edited and designed the news and business sections.

Then, the recession hit. Newspapers were gutted. Soon, my team was gone, and the newsroom—which used to come alive as we got closer to midnight—was dark and silent at night.

I didn’t want to try to keep producing a newspaper while mourning the end of the industry as I knew it.

Salvation came in the form of a guy named Josh. Josh is a skilled journalist I’d worked with at my first newspaper. He was a triple threat who was adept at designing, editing, and writing, and he’d ended up at one of the two major newspapers in Chicago. During the recession, Josh found an editorial position with a Chicago-area association.

Much earlier in his career, Josh had worked at a small-town newspaper in northern Illinois with AMC’s Chief Experience Officer Clay Baznik. When Clay, who was then director of Creative Media Services, was seeking an editor who could handle the deadlines of a monthly trade magazine, Josh suggested me, and thanks to the luck of knowing the right person who respected my work ethic, I got the job.

As Luck Would Have It …

At AMC, I don’t leave anything to luck. I plan, strategize, and cover all my bases to ensure I help my clients. I act as though if I work hard enough, I can foresee (and avert) any obstacle or unintended outcome.

But that’s not how I got here. Or is it?

Sure, some apparent random coincidences or happenings brought me to AMC, but maybe they don’t qualify as luck. I’ve never been a ladder climber who acts simply to advance my own career. I keep my nose to the grindstone and try to do the best job I can for those who depend on me.

It’s easy to attribute every step up, every advantage, to good fortune. But, in truth, none of those strokes of “luck” could have come about without my hard work. I wouldn’t have had the chops to get the jobs or the work ethic to earn former coworkers’ endorsements.

What do I do for a living? I make magazines, brochures, and, I hope, clients happy—and some days, I even make my own luck.

Julie Rogers is a senior content marketing and editorial manager on the Creative Media Services team at AMC.