One of an association’s most important responsibilities is to act as an advocate for its field. That’s why finding new and innovative ways to engage membership and communicate the needs of the industry to lawmakers and regulators is an integral part of operations for our clients.

In 2016, several of AMC’s clients—including the Association for Pediatric Hematology/Oncology Nurses (APHON), the Hematology/Oncology Pharmacists Association (HOPA), the Association of Rehabilitation Nurses (ARN), and the National Association of Neonatal Nurses (NANN)—took their efforts to make their members’ voices heard one step further by introducing a Virtual Advocacy Day or Week, ensuring even those who couldn’t make the trek to Capitol Hill played an important role in developing the laws that affect them most.

“When we have members who are in the Washington, DC, area that we can get to the Hill, the question becomes how do we make our other members feel just as engaged and ensure their voice is just as loud as those who are actually meeting with lawmakers?” said Jordan Wildermuth, manager of health policy & advocacy for APHON, ARN, and HOPA. “The Virtual Lobby Day is a mechanism by which we can all be unified and reinforce the message that the association is taking to the Hill.” 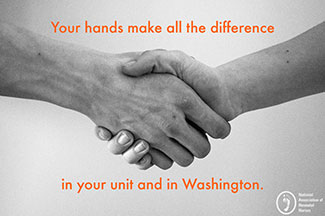 On their respective Virtual Advocacy Days—which each association scheduled to coincide with their onsite advocacy efforts—both APHON, ARN, and HOPA offered members template Tweets, Facebook posts, e-mails, and letters, ensuring even those who were not already familiar with how to reach out to their representatives could do so easily. The associations also sent strong encouragement for each and every member to personalize their messages with their own perspectives and feelings on the issue, so individuals could have their own opinions heard.

However, even those members who only have time to send a simple, stock Tweet have an extraordinary impact on legislative decision making, said Wildermuth. “Many legislators simply count volume, and once they hit a certain threshold, they start thinking, ‘Ok, I need to pay attention to this issue,’” he said. “That’s why sending even a stock message is better than not sending anything at all.”

Each association’s unique membership participated in different ways, but all engaged strongly with the issues important to their respective industries. Wildermuth cited messages such as e-mails and letters as the most popular forms of outreach for APHON members, and HOPA members flocked to social media to make their voices heard. For their part, many ARN members chose to reach out via the association’s Legislative Action Center at www.ARN.org, sending 153 messages to their legislators.

But digital advocacy efforts don’t have to limited to a single day. For their inaugural virtual advocacy initiative, NANN chose to reach out to members every day for a week, offering them a wide variety of ways to get involved and make their voices heard and creating an initiative that would persist online long after the official advocacy week was over.

“NANN committees wanted to create something that not only was eye-catching and effective, but that could be a reference and endure on our website, as well,” said Claire Bunschonten, account operations coordinator for NANN. “And that’s exactly what we did! We hope to continue bringing visibility to neonatal nursing issues in 2017 by reusing this structure and discussing a new issue.”

On day one of their initiative, while nurses were taking on Capitol Hill for the onsite advocacy efforts, NANN sent members background on the initiative they were supporting—S.2041, the Promoting Life-Saving New Therapies for Neonates Act of 2015—because “the first thing you need to do as an advocate is brush up on the issues,” said Bunschonten.

Throughout the remaining days, NANN offered members tips for writing their representative and reaching out via social media; the Capitol Hill switchboard number and instructions for how to contact representatives by phone; tips for how, and a call to action to, set up and navigate an in-person meeting with members of Congress regarding these issues; and finally, on the last day, a summary of the initiative and its potential effects on the legislation. NANN also shared similar messaging on Twitter and Facebook, encouraging members to make their voice heard online, as well.

Throughout the initiative, said Bunschoten, NANN saw a higher-than-average forward rate of advocacy e-mails and thousands of impressions on their respective social media platforms.

But for NANN, APHON, ARN, and HOPA alike, this initiative is just the beginning.

“Considering that this was our first run at a program like this, we were pleased with the engagement from members,” said Bunschoten. “And we have an even better sense now of what speaks to the members and what’s more shareable to make it even more successful in the future.”

“[For APHON, ARN, and HOPA], we did the virtual advocacy initiative in conjunction with our Hill days, but down the line, if our issues start to gain traction, we can keep up the coordinated efforts within our coalition and do virtual messages again to push the momentum,” said Wildermuth. “Now, we can piggyback on virtual efforts we’ve done previously to get things across the finish line in the future.”